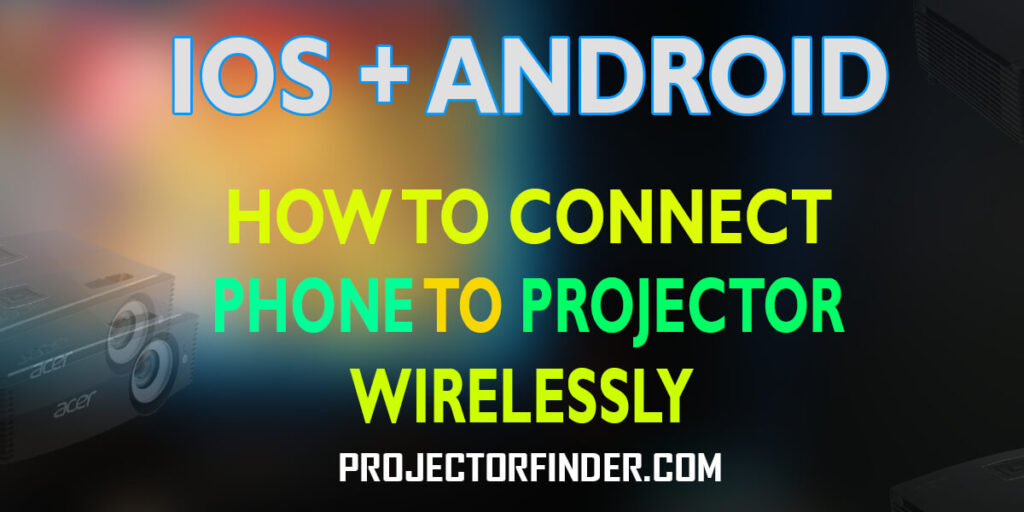 Go modern and go wireless; if that is how you roll, you might be well interested in exploring how to connect phone to projector wirelessly.

And why would you? The hassle of connecting the cables… Limited range. On top of that, the ease of enjoying the projector just dies down when the folks still switch to the old-fashioned and back-dated mechanism to operate the projector with.

For the same reason, the wireless era’s commencement is all-set and suited for everyone to enjoy clutter-free entertainment. It just takes power to power up your projector, and that comes into your full control, where you get to navigate everything out of the projector using your little smartphone.

See the portable projectors being operated with your phone on the outdoor location; you are so useful to enjoy your time outputting the best entertainment! And the same applies to different conditions and situations where you are forced to use/connect your phone with the projector.

So, let’s learn how the connection of the projector with the phone goes all wirelessly!

And we would commence with the step-by-step process covering the Android and iPhone separately.

Oh yes, the phone is the phone, but Android and iPhone are totally different; hence the technology and connectivity used because of being totally identical from each other. And that is the very reason to cover them both separately.

Also Check: How to Connect Android Phone to Projector via USB

How You Can Connect Android Phone to Projector Wirelessly

Before digging deep, we first need to collect and put up the required instruments to make a successful connection with the projector wirelessly.

To have it set up through Miracast, the first step is to actually download the Miracast first on both devices, your Android and the projector.

In a situation where the projector does not have the built-in Miracast functionality while your Android phone does, do not worry about that at all.

Purchase the Miracast video adaptor that goes into your HDMI port up on the projector to make the wireless connection established between the phone and the projector with ease.

And how really connect the Android phone using the Miracast through the Miracast video adapter? Let’s follow this simple guide;

That is all it takes to connect the Android phone through Miracast wirelessly.

Okay, we understand your projector does not support Miracast, and the second and most-common alternative is to employ Chromecast made and offered by Google itself.

Known for delivering the high-end and qualitative image in 4K and UHD, watching the content through Chromecast makes the whole experience fabulous for you.

By the way, hooking the Chromecast with the projector to utilize the phone is far more convenient than the many tried methods, so it just takes merely a minute to get it all set up quite successfully.

How to Connect iOS Phone to Projector Wirelessly

Believe us, that is one heck of a simple method to get the iPhone connected with the projector all wirelessly to cast what you got up on the iOS-backed iPhones and iPads!

Well, mirroring the iOS phone and iPad is quite simple to do so, but how exactly to get it done; that is still the myth to many.

For us, that takes just less time to get it all set up.

What if your projector got to support HDMI. And in case if it does not, nothing to get worried about, and you only see the VGA port, do not mind at all.

Get the HDMI to VGA converter/adapter the soonest. The soonest you gather the stuff up and together, the HDMI to VGA adapter goes into the VGA port found on the projector the ONLY–HDMI ones seem to be found bearing the ultimate convenience.

Also Read: The Best Outdoor Projector Screens for This Year

Conclusion of how to connect phone to projector wirelessly

Thankfully, the search is finally over — the method is cleared and determined, and that takes you to solve the riddle of how to connect phone to projector wirelessly.

Because the wireless is the new face of an era where almost all the products and technology have been moving around to get stuck with wireless connectivity even though the old traditional methods are still dominant around the world.

Let’s get to spend some of the money over the newer technology and feel the difference of getting rid of cables’ clutter to ensure you will never see ’em for sure.

So, happy mirroring the screen AND enjoy your iPhone and the Android phones to the max of the entertainment!