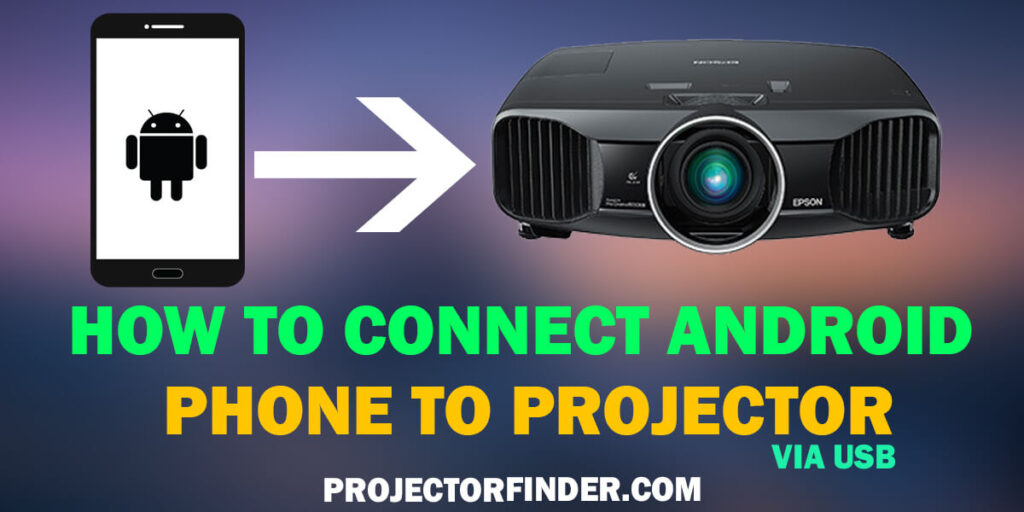 Seems a task, the question of how to connect Android phone to projector via USB resolves to its best and by us, of course! 🙂

Luckily, the best 4k projectors under 2000 do come up with the USB port (must evaluate before purchasing the projector if the USB is your primary concern.)

And connecting the phone right up with the projector is streamlined using the USB port but how really to do that; let’s find it out in the complete details we are going to reveal below.

How to Connect Android Phone to Projector via USB

See if you got a modern projector. What if you lived a decade ago and ended up with the projector that only lasts with the couple or just the handful of connectivity options.

And yes, these modern devices cannot hook up with the old-fashioned projector, unfortunately.

But do not die it down here. There we got a couple of ways to make them up and running with the modern devices (smartphones backed by Android, primarily) with incurring some of the additional cost (yes, the money works here!)

Broken into the pieces, connecting the Android phone to the projector via USB is the complete process to check and balance before leading towards the connectivity.

The connection options the projectors come with

Upon this moment, it is to check whether the projector has the built-in support to establish the Android phone connection without tweaking the things.

And to do that, you should own something modern from both ends; Android phone and a projector containing everything latest.

Okay, we have been mainly focusing on the projector, and our primary target is, it should at least have the USB port named specifically USB-C (which the modern projectors do not lack.)

Now and if by chance, the USB port is not there, and at least it would contain one HDMI port for sure. And yes, the projector is too old, and you got it purchased likely a decade ago; chances are it would not have the HDMI port’s concept, which makes the job trickiest enough to establish the connection between the phone and projector.

But still, no worries… The adapters associated work with VGA to get the Android phone connected (cost associated task!)

What does the Android phone get?

It is time to check what the Android phone got because that is the second device that goes to connect with the projector using the USB port.

Known to be labelled the micro-USB port as MHL (or, Mobile High-Definition Link) to seamlessly connect the Android phone directly plug it into the micro-USB or USB-C type port embedded on the projector.

Another seamless type of connectivity is established by hooking the phone off of the USB port that takes the wire to go into the HDMI port placed on the projector.

And that is the second easiest option to get the connectivity hooked up without running and causing much trouble.

At first, what you need to check is whether your phone is capable and does support to send the data right from the USB port to the HDMI port placed on the projector, and in order to do that, your phone must get equipped with the adapter that supports the USB signals to transmit out of the HDMI port.

Connect up everything together and TEST

Got the USB plugged into the projector coming straight from the Android phone AND seeing the phone screen up on the projector screen? Voila! You are all done and ready to stream your best content to watch on the bigger screen.

And whatever method you use (MHL to HDMI) or more, the screen should be displaying the soonest you turn on both devices, AND the cable is connected to bridging up the two devices.

In case the screen does not work, restart both of them with the cable connected to ensure the signals are picked, which is the only way to troubleshoot this fundamental problem.

And in the rare cases when this method does not work at all, check/replace the cable OR test the ports to make sure they are not damaged to see what causes the issue and which one rectifies it.

Okay, you got the built-in USB-C or micro-USB port up on the projector; you are right.

You got the MHL-support on the Android phone and HDMI port up on the projector and got the adapter for that; you are indeed right!

In case there is nothing upon the projector nor the phone, what to do in such a situation?

All the old-fashioned and old-school projectors had the VGA port. So, you must obtain the adapter for VGA to USB to make both devices bridged with.

Not only we cleared out the whole concept of how to connect Android phones to projector via USB but came up with a bit more as satisfactorily to resolve the uncertainties if your phone or the projector does not contain the latest connectivity ports.

This kind of setup works best in the remote location, where you cannot generally come up with a whole bunch of devices to hook up with the projector. You are accompanied by your Android phone and the portable projector to kill off the boredom.

So, let’s get yourself settled with understanding this task to the core AND never ever look for the particular information to get revealed with the exact details to hook both devices together just like a pro!