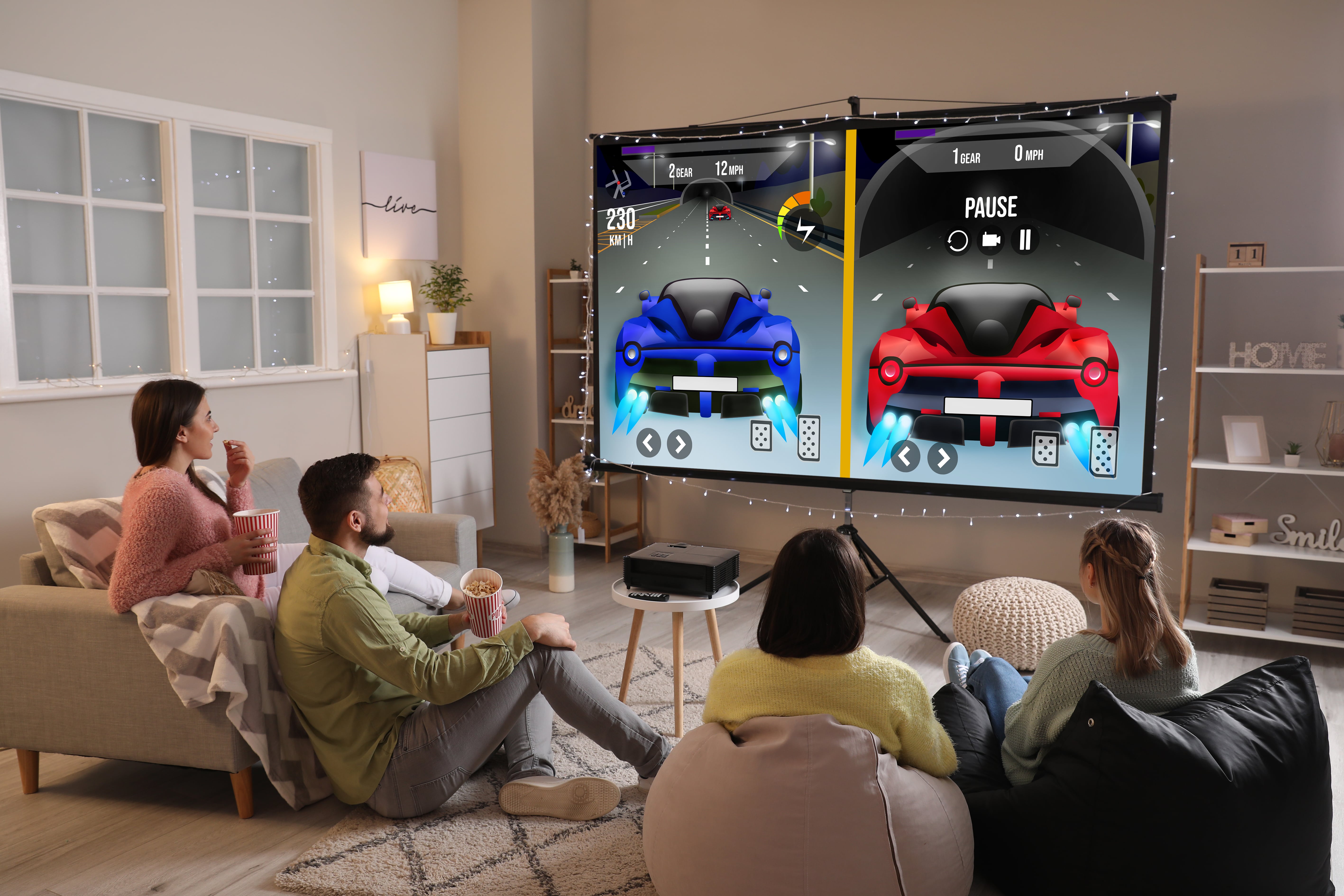 A chain is only as strong as its weakest link. As a gamer, you don’t want that link to be your projector. A gaming projector with a fast, smooth-running picture makes for stronger playability, while richer image, light, and color qualities all add depth to the gaming experience.

Since striking the right mix of projector features depends to a great extent on your budget and priorities, here’s a list of standout gaming projectors currently on the market – and a handy guide on the most critical factors when shopping for a projector. Enjoy!

Top 6 Best Projectors for Gaming in 2022

These projectors are explained with pros, cons, and other options to make it easy for you to choose the best projector for gaming. 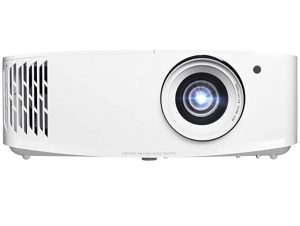 This one is a gamer’s Cadillac. The Optoma UHD38 4K UHD offers truly lag-free gaming, with a 4.2ms input lag, a 240Hz refresh rate at 1080p, and the lowest lag of any 4K projector on this list. Allowing for 4K ULTRA HD, this DLP projector provides crisp, smooth images and vivid colors – with a rich 1,000,000:1 contrast ratio and a 4,000-lumen brightness for daytime viewing. It connects to Microsoft’s Xbox Series X/S consoles, as well as the latest Sony consoles, and the projector’s fan runs very quietly.

One downside of the Optoma UHD38 is that the refresh rate drops down to 60Hz when switching to 4K, and a slightly higher input lag at 4K. Also, replacement lamps are not easy to come by. 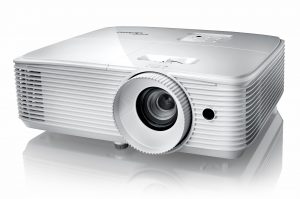 If you’re in the market for a dependable, value-for-money DLP projector, you won’t go far wrong with the Optoma HD39HDR. Offering 1080p resolution at a 120Hz refresh rate and an 8.4 input lag, this workhorse serves up 4,000 lumens of brightness and crisp, colorful pictures at a 50,000:1 contrast ratio. Another advantage is that, unlike many gaming projectors, its fan runs quietly.

One downside is that despite the 10-watt speakers, you’ll most likely need to add external speakers. Another is the short lamp life, as well as the slight smear in certain high-contrast images. Overall, the HD39HDR is a solid buy for gamers seeking a budget option. 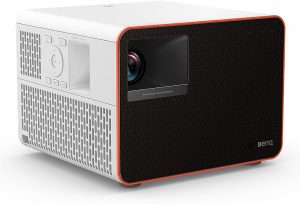 A good bet for gaming and movies, the BenQ X1300i offers Full HD at 3,000 lumens of brightness, useful for most settings, as well as an 8.3ms input lag, and quality images with a 500,000:1 contrast ratio. Another useful feature is the manual zoom. This model is compatible with Sony PS4 and PS5, Nintendo Switch, Xbox One X, Google Stadia, and other major consoles; and has Chromecast and Google Assistant built it.

Additionally, the X1300i’s form factor is a departure from the usual boxiness of gaming projectors, with a cool neo-retro look. Who said projectors can’t be pretty?

On the minus side, Netflix is not natively available on the device, the fan is quite noisy at times, and despite the listed 4K “support”, you should probably go in knowing that you’re buying a Full HD projector. 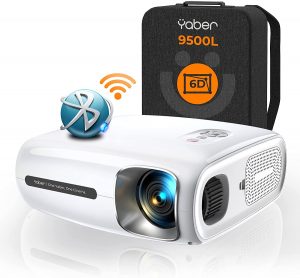 We shan’t mince words: this is a gamer’s quick and dirty option. If you’re on a tight budget, the YABER Pro V7 is an affordable LCD model. It’s Full HD (1920×1080), with relatively modest performance: a 60Hz refresh rate, 9,500-lumen brightness, and a 12,000:1 contrast ratio. On the plus side, this model does offer an auto 6D keystone correction (which realigns skewed projector placement to ensure a square display) and supports Bluetooth and WiFi.

On the minus side, the projector’s fan isn’t the quietest, which tends to come with the price range, and some users report the picture quality to be dimmer or blurrier than they expected. 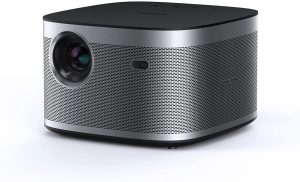 This compact number packs a relatively impressive punch for its size. The Xgimi Horizon is a Full HD DLP projector with 4K support. Featuring HDR (high dynamic range), it provides rich images at 2,200 ANSI lumens of brightness. Some advantages include the full-room sound from the 2x8W built-in Harman Kardon full-range speakers and the integrated Android TV 10.0 user interface. Additionally, it’s one of the more portable projectors we’ve seen, and its fan operates very quietly.

On the downside, the refresh rate on this model is only 60Hz, which is suboptimal for gaming projectors, and some users have complained of a glitchy Bluetooth connection.

A solid budget option for gaming and movies. The Optoma HD28HDR is a Full HD DLP projector with support for 4K HDR input. It offers a reasonable package, with a 120Hz refresh rate, an 8.4ms input lag, and a 50:000:1 contrast ratio at 3,600 lumens of brightness – performing exceptionally well in brightly lit settings. The fast response time makes for comfortable gaming, and the projector fan runs quietly.

On the minus side, it does tend to get very hot during operation and takes a rather long time to turn on and switch inputs.

Things to Consider When Buying a Projector for Gaming – Buying Guide

So you are considering buying a projector for gaming but don’t know what to examine? Check out this buying guide to read the considering factors. 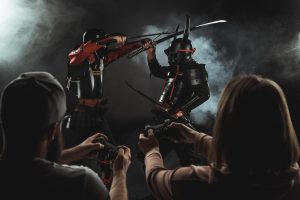 The first thing to consider when buying a gaming projector is whether you want a DLP (Digital Light Processing) or LCD (Liquid Crystal Display) projector. Both technologies have their advantages and tradeoffs.

DLP projectors are smaller and lighter to carry, with smoother video, better contrast, and less pixel visibility. Their blacks are blacker, and they achieve a “film” look on HDTV. On the downside, they do suffer from the rainbow effect (color breakup), have more moving parts, and have poorer-quality yellows and reds at full power. Additionally, they tend to be the pricier of the two technologies.

LCD projectors offer better picture quality with a sharper image, richer color dynamics, and no rainbow effect. They’re quieter than DLPs (which produce an audible whine) and generally cheaper. If picture quality is what you’re after, go LCD. However, LCD projectors also suffer from more visible pixels, a screen door effect on certain video images, poorer contrast, and more grayish blacks than on DLPs. They also tend to be bulkier.

The bottom line: it all depends on your priorities.

Your projector’s refresh rate is the number of times the projector draws a new image each second. This is measured in Hertz (Hz) units. For example, 100Hz would mean that the projector refreshes the image 100 times a second.

Since all video (and in fact all film) is merely a quick succession of images that appears to move, the higher the frame rate per second, the smoother the movement will appear. To make sure that your projector keeps up with the frame rate produced by your CPU and/or GPU, we highly recommend a minimum of 120Hz refresh rate for gaming projectors. Any lower than that, and you risk choppiness.

This is a no-brainer. Your projector’s resolution (number of pixels onscreen) directly affects image quality and definition. When it comes to gaming projectors, you should shoot for a resolution of at least 1080p, also known as Full HD – consisting of 1,920 horizontal pixels over 1,080 vertical pixels.

For superior image quality, you may want to opt for 4K, which at 3840×2160 pixels (for most models) offers four times the pixel count as 1080p. This used to be out of most people’s budgets. However, native 4K projectors (unlike 4K upscaling projectors, which merely “convert” Full HD to 4K) are becoming increasingly more affordable.

One of the factors in selecting a gaming projector is location: where are you going to play? Indoor? Outdoors? A dark basement? A brightly lit lounge? Will there be direct sunlight or just artificial light? Also – how big is the screen?

Rule of thumb: the brighter the setting and the larger the screen, the higher the projector’s lumen count needs to be, “lumen” being the unit for visible light. For bright rooms, outdoor settings with strong electric light/sunlight exposure, or a large screen over 100”, choose a projector with at least 3,000 lumens. For darker settings and/or smaller screens, between 1,000 and 2,000 lumens should do.

Simply put, contrast ratio (CR) is the ratio between the luminance (light intensity) of your projector’s brightest shade (white) and that of its darkest shade (black). The higher the contrast ratio, the livelier the “color dynamics” will feel – i.e., the more different the various shades of color will appear onscreen. A gaming projector should have a good contrast ratio of at least 50,000:1, and the more the merrier.

Measured in milliseconds, input lag is the time it takes a signal to leave the gaming system or computer and reach the projector. It is inversely proportional to the projector’s response rate. Simply put: “Lag bad, response good”.

To stay below a noticeable threshold, avoid unsettling asynchronous effects, and prevent your opponent from beating you just because your projector’s too slow, the acceptable range of input lag for gaming projectors is anywhere from 16ms to 50ms.

This final item is a bit involved, but it’s worth your while. Several factors go into the screen size of your gaming projector, including the dimensions of the screen in your room, the aspect ratio of what you’re going to project, the projector’s throw distance (i.e., distance to the screen), and more. As anyone who’s ever watched a classroom slideshow on one of those old overhead projectors knows, these factors all make a difference.

To get a crisp, enjoyable image, we highly recommend that you take the time to calculate screen size before choosing your gaming projector.

As this article should have made clear, there’s a whole slew of considerations when buying a gaming projector, and a broad range of prices, from budget projectors to pricier models. The more you invest, the better your gaming experience will be – yet budget isn’t the only consideration. By taking the time to prioritize your gaming needs, you’ll be able to buy the right gaming projector for you.