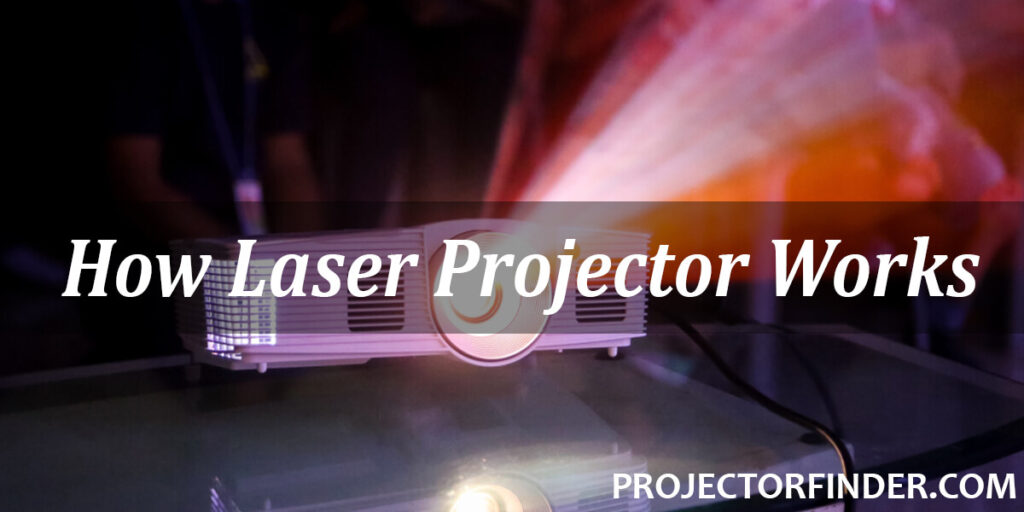 This article will answer your question by guiding you through the different ways a laser projector performs and gives a high-quality screen. So relax and read this article thoroughly, know the working and performance of laser projectors in the most straightforward words.

How Do Laser Projectors Work? – A Simple Explanation.

There is a lot of physics behind a laser projector’s working, so we will try to explain it to you in the simplest words. Hence, it can be easy for you to understand, but also you can elaborate on others as well, so let’s see how laser projectors work compared to an ordinary bulb projector.

Let us start from the molecular level—the laser projectors’ main start is when the current is supplied to the projector. The current excites the electrons present in the gas or any other element that will be emitting the laser.

The electron jumps from low to high orbital levels due to electrical conduction and stimulation. When electrons get relaxed, they move to their previous places, emitting a set of energy in the form of rays. These are different colored radiations that make an image after going through various processes.

This RGB laser technology is costly and used for cinematic purposes primarily. So it is not under the range of every person’s affordability as it is very latest and expensive.

RGB laser technology is costly and almost not affordable for normal household users. Many projecting companies have developed another model called hybrid laser technology, which does not use RGB lighting and thus is efficient and affordable.

These lasers are more efficient and cheaper for using only one type of light, which is then modified to different sets of colors.  This technology is being widely used in all laser projectors so people can enjoy the best display in their field.

All of these technologies can be found in different laser projectors. Each one of them functions differently and goes through sets of procedures that are minor differences from one another. But in the end, all of these laser projectors give is a delicate and ultra share display that one dreams of.

But all the result projector gives the same quality and find a display with high energy efficiency And ultra long life span. But with that comes some disadvantages also including heavy price point large size of the projector.

Advantages of a Laser Projector:

Since these laser projectors are the latest development in the projector world, some following advantages will tell they are a good thing to get your hands on.

They are very energy efficient as they only consume the amount of energy required to produce the laser beams.

They are easy and instant to start.

Their lifespan is exceptionally long. It can go up to twenty thousand hours without and internal damage. So you can use them for a long time (for years) without worrying about worsening them.

To everything with advantage also have some disadvantages, which are as follows:

They are expensive than regular projectors that you have in your houses or offices. And some of them could be out of your range.

They are very heavy compared to the regular bulb projectors, making them hard to carry and travel with.

In the end, it all depends on you if you want to get your hands into this projector or not as it is the latest developed technology we will recommend you do at least have it if you can afford it. Thanks for reading this article. We hope that it was informational for you.