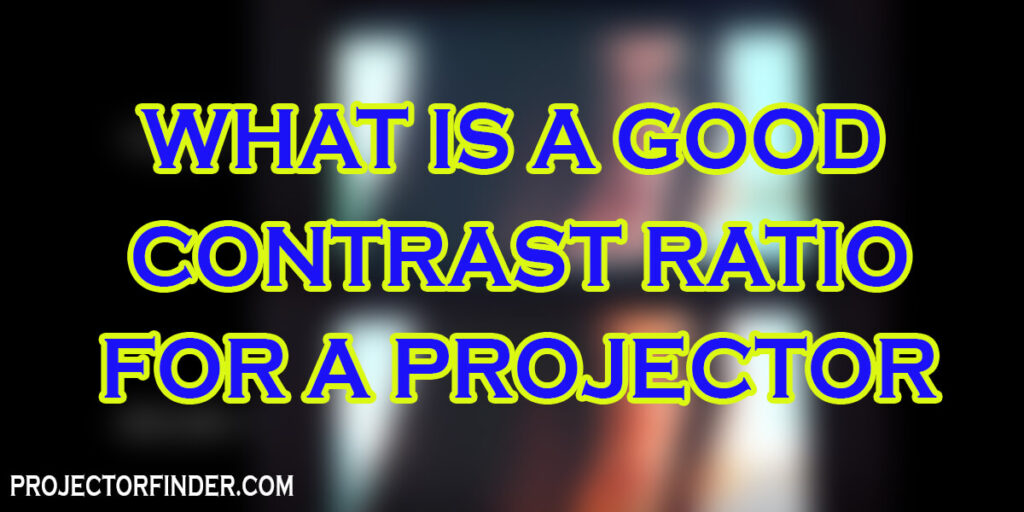 The first and foremost important thing that matters in a projector’s image quality is its “Contrast Ratio”. Since now you are having a projector, it’s important to know how you can get most of the purchase yield in expressions of image quality.

Every of single detail matters in image quality. How and what is a good contrast ratio for a projector is a question that disturbs many projector users. From perfect resolution to correct vibrancy and sharpness, everything has its importance in its shoes. All these balanced things together, give us the desired image quality. However, the game-changer card in the game is the Contrast Ratio.

What is Contrast Ratio

The contrast ratio is the difference between the white and black light of the image expressed by numbers. To better understand this, you need to understand that the sharpness of an image is at its high peak when comparing the whitest and the darkest light of the light.

So, What Is a Good Contrast Ratio For a Projector?

“The higher the contrast ratio, the better will be the image quality.”

However, this contrast ratio will also be affected by the surrounding. If you use this ratio in a dark environment, then you will notice that the image quality is extremely impressive as you may think of it. For better experience and results, spend some time in your environment to figure out the desired contrast ratio.

Note that, every person has its likes and dislikes. This recommended will prove to be best for some people, while for others it may be just so so.

9000:1 contrast ratio is also a good one. But as mentioned above, some may find it okay, while others take it as a bit off. Personal experience and preference will win in the end.

Why Is Contrast Ratio So Important?

Many people ask that why do I even care about contrast ratio, mean is it that important? To all the people out there who have the same question (even if you), the simplest and the honest answer is, Yes, its Hella important to maintain the contrast ratio of the image.

Think honestly what is the use of having an image quality that doesn’t even show the image properly? According to the good rule of thumb once you spend your money on any product, and then it is your right to get the best outcome from it.

What Affects the Contrast Ratio?

The biggest enemy of contrast ratio is none other than “Light.” A little amount of room light or any other outdoor light is enough to destroy the settled contrast ratio. Either you have a 1000:1 or 10,000:1 ratio, just turn on the light, and then try to distinguish between them.

Try the following method to keep the contrast ratio maintained.

Lastly, even after trying all these mentioned ways, the contrast ratios remained disturbed, and then try some electronic techniques to increase the contrast ratio. Or you can go with the second option of having a bright projector.

A bright projector can reduce the effect of explosive light but cannot eliminate it.

Also read: The Best Daylight Projector That You Can Get in 2022

How to Measure the Contrast Ratio?

This method is a more advanced and accurate one. ANSI contrast doesn’t use the IRE test pattern method; instead, it uses a checker rectangular board. The rectangular board is consisting of 8 black blocks and 8 white blocks. The brightness of the white & blocks are measured than an average is calculated. After taking the average values, the ratio is calculated.

The calculated ratio is known as the ANSI Contrast.

We do hope that after reading this article your all queries must all solved. In this article, we give you detailed information about what is a good contrast ratio for a projector and how to calculate it.

Figuring out the best contrast ratio for a projector is not such a difficult task. We have mentioned the methods to calculate it.

Lastly, every person will prefer a different contrast ratio per its taste and priorities. Do figure out your preferred contrast ratio or try our recommendation.