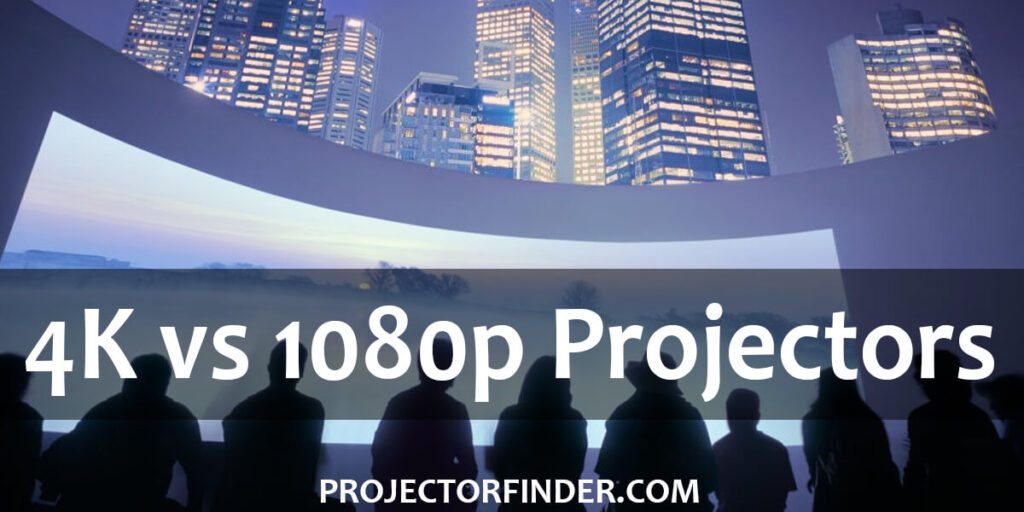 If you are someone who watches movies quite often and wants to buy a projector to watch them on, you might be interested in knowing about the best projector that you can get, whether in 4K or 1080p? Maybe you usually have friends over that watch movie, Netflix, or YouTube with you, and you want to make that experience better by buying a new projector.

Well, then what do you do? You know that the two resolutions in which projectors are sold are 4K and 1080p. But which projector type out of these two is the better one?

Well for that we’ve made this comparison for you, so you need not worry about buying the best projector that’s out there.

The Criteria for Judging:

We’re going to judge both of these two types of projectors on the following basis.

But as a summary, we’ve included this table to let you know the key points.

We’re getting straight to the most important criterion that one can think of, and that is the cost. As is the case with anything that is of good quality, it comes with a price tag. Nothing in the world that has superior quality is sold for cheap, the same applies to projectors.

A 4K projector, in general, would be more expensive than a 1080p one and that is mainly due to the graphics quality. However, that might not be the case when comparing a specific 1080p model to a 4K one, where you might occasionally see 1080 ones being priced higher.

One does have the option of getting second-hand models that are being sold by either friends or sources that are of good reputation.

Occasionally the price of a single projector, be it either 1080p or 4K, will be inclusive of installation charges. Though that is rare and most projectors can be installed by anyone with ease.

Going cheap can be a good idea if you’re short on cash. But comes with the consequences of getting stuck with low-quality graphics for a long time.

Pick up a leaf, look at it with your naked eye. Looks good right? Now put it under a microscope, and zoom in. Looks even better now. That’s because of the resolution.

In the world of graphics though, the more pixels a picture or video has, the clearer it will be. 4K by default has 8000 pixels, much more than just 1080 of 1080p. That’s the whole reason why you get such a clear picture from 4K.

Though another factor that would influence the resolution would be the distance you’re watching the video on. If you’re someone who watches videos on TV or on projectors over a distance of 10 feet then you might want to consider 1080p. However, if you sit at a distance of fewer than 10 feet then 4K is for you.

A projector works best in a room that has no light other than the projector’s own light. Though that isn’t necessarily attainable as you’d want to see who’s sitting where? Where the snacks are? And you also have to make sure people don’t stumble in the darkness. That’s why the room’s own lighting is usually dimmed.

A brighter projector needs to fight against the other light sources in the room so that what it’s displaying can actually be seen. And that is exactly why the projector you’re looking for should have high brightness.

Usually, 4K is better in this department as 4K projectors tend to have a higher brightness. Though as is the case with better quality, you’d have to pay more to get better graphics results. Though there are individual exceptions where a 4K projector has the upper hand over a 1080p one.

Contrast can be defined within projectors as their ability to pick up darker hues on the screen. For any projector, be it 1080p or 4K, to have a high contrast rate is absolutely necessary. The pictures being displayed, especially if it is a scene with many shadows, or in the dark, have hues that need to be seen as intended.

Now it might come as a surprise to people but in this criterion, 1080p has the advantage! A 1080p projector can show those dark hues and shadows easily, even in the room where the projector is installed is light brightly, a 1080p projector would still be able to pull off a comparatively better result than 4K.

This mainly has to deal with a better contrast ratio. Which 1080p seemingly has an advantage in. The better the contrast ratio is, the better picture quality you are going to get.

Though as is the case with multiple models of multiple brands all over the world. You might see examples of 4K trying to outclass 1080p in this criterion. So you should know while viewing individual specifications that not every 1080p projector will have a better contrast ratio.

Installation of projectors is usually fairly easy. Almost every projector comes with an instructions manual so as to let the customers know how and where to use them.

You’d need to consider the specifications and dimensions of the room as well, where the projector would be used. The height, length, breadth, and even the right angle to get to see the media properly, all should be known beforehand.

The last thing to be considered here is the distance between the wall and you. Do you sit at a distance about ten feet away from the display? If yes, then 4K might be the better of the two for you. Though if you sit at less than ten feet then you probably would want to buy a 1080p one.

The last of our criteria is the content that you want to stream on the projector. Is it some Hollywood movie? Or maybe it’s the latest GTA or Call of Duty franchise games? Or is it a Netflix series? Maybe one of those how-to videos on YouTube? Or maybe some Facebook Livestream? Either way, a projector, be it 1080p or whether it is 4K, can do all of that.

What must be paid attention to though is that the vast majority of videos and games on the internet still are in 1080p. And converting everything to 4K/2160p is a tedious and time-consuming thing to do.

Even as we type this in late April of 2021, YouTube’s highest resolution is still 1080p. Now what this means is that the majority of videos on the net are still in 1080p. So it wouldn’t really make sense to pay for a 4K one just yet. Well at least till we get more content in that resolution.

Though if you have your own video-shooting setup is available then it would not be a hassle for you to view anything through a 4K projector. Though for countless people stuck in the 1080p v 4K question, they’d want to consider 1080p.

The last thing that falls under the category of “content to be streamed” is internet data. Way too many internet service providers (ISPs) around the world offer monthly data packages of up to 1 TB/month. Now for a 1080p projector enthusiast, this would be affordable as they won’t use up all their data. But for someone who likes 4K, you will most certainly end up burning through your 1 TB.

Pros of a 4K Projector:

Cons of a 4K Projector:

4K projectors are much more expensive compared to their 1080p counterparts. But what they also have an edge over those 1080p ones is the sharper resolution and the brightness. But you need to sit really close to the display of these 4K projectors.
Read our reviews for the best 4k projectors.

The 1080p ones too have their own advantages. They capture hues much better and are much cheaper to buy. But you wouldn’t want to cheap out and get stuck with a 1080 one either if you have the budget. 1080p would also burn less data.
Read our reviews for the best 1080p projectors.

All in all, both types have their own advantages and areas where they lack in. So it is up to you, the readers to decide what you want.