To enjoy a movie night or Netflixing, the majority of the people prefer projectors over ordinary televisions. The reason behind this is that projectors offer a large screen size. But how large can you get? Either you already have a projector or planning to get a new one, knowing the projector screen size is a must thing, man!

The listed measurements on the back are helpful but, it will become hard when you compare them. So how to calculate projector screen size? Before we tell you the way to calculate it, first read about the factors which play an important role in measuring the screen size.

How You Can Calculate The Projector Screen Size?

The majority of the products have their size list at the back of the packaging in terms of dimension. In the case of projectors, you will see only a single list of screen sizes. The first step you have to take is to estimate the image size from the provided dimension’s data.

Furthermore, projector reflections and television are measured by diagonal. This calculation is the same that is used to screens themselves. So if you want to figure out which screen size will perfectly match your projector, all you have to do is, compare the screen with one another.

Generalize the Width and Length

Knowing only diagonal will not be enough in some of the situations. You might want to conclude out that what would be the best fit for the screen in your room. If you want to calculate the dimension of the screen from the screen size, then for this task, you have to go back to your school day’s geometry class.

After this hustle, the projector’s point ratio will come out. This whole calculation will tell you the linkage between the height & width of the image (which is represented in the mathematical ratio). If your calculated ratio is 1:1, then this means that the height and width both are of the same size. Similarly, if the outcome ratio is 2:1, then the width is double the height.

The thing here that you need to notice is that different contentment has a different aspect ratio. The TV shows and HD movies have a 16:9 aspect ratio. So, if you want to enjoy a truly cinematic experience, then the 2.35:1 ratio is your need.

We know that everyone is not a genius at mathematics, so if you want to calculate the aspect ratio measurement, then you can easily calculate it online.

Had you heard About the Throw Ratio?

Contrasting with the television screens, the projector’s screen is not that fixed. The image’s size produced by the lamp of the projector will vary on the basis of the distance between the screen and the lamp.

What is Throw Distance?

Long-throw needs to be placed at a distance from the screen to get a large image view with a non-pixelated image result. The long-throw projectors are usually used in auditoriums and cinemas.

So How to Calculate Projector Screen Size? 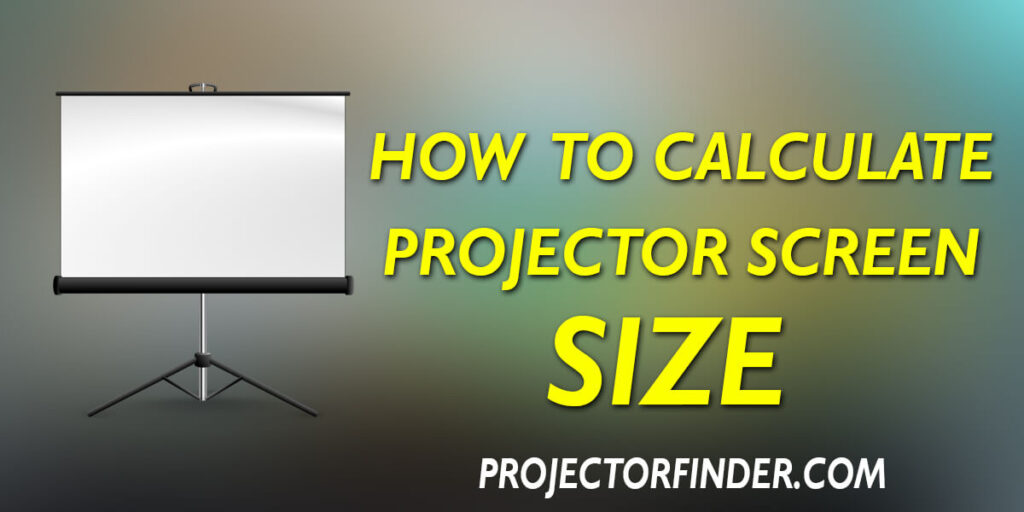 Well after this long discussion, you must have figured out that there are a few factors (mainly three) that play an important role in the calculation of the projector screen size.

Aspect Ratio: It is different for different content. For HD you need 16:9 and for cinematic you need 2.35:1.

We understand that it must seem complicated to you, but believe us it is not that complicated. Measure the wall and lens distance, multiply it with the throw ratio. Image width is calculated. Now use aspect ratio to calculated height, and then the Pythagorean Theorem to get the screen size.

As simple as this!

Don’t take this whole process as too complicated. A little bit of practice and patients will lead to calculate the right screen size of the projector.

Remember that arrangement of the projector will also affect the distance and the image size. Moving side-to-side or up down in connection to the screen will alter the angle. The best angle for large viewing is 30 degrees.

Lastly, ending this article with the hope that you must have figure out how to calculate projector screen size.